Pivot with out aggregate

Pivot without Aggregating with consistent and inconsistent formats:

Before SQL Server 2005, in the earlier versions we used to perform this through using cursors and temp tables which takes a lot of I/O. Starting with SQL Server 2005 which provides a new operator called PIVOT which actually does this, but the main purpose of using PIVOT is to rotate the table data from vertical to horizontal as shown in above picture, and performs AGGREGATIONS on required columns which will be shown in the final data set.

As per the syntax PIVOT only works with an aggregate:

But I don’t want to do any aggregate operation as all I want is to transpose the data into a tabular format.

There are 2 approaches to do this based on the requirements:

1. If the column names are consistent across the data then follow the 1st approach

2. If the column names are NOT consistent then the 2nd approach will solve the purpose using a schema table.

Approach- 1 :- columns (NAME,ADDRESS,PHONE ,EMAIL) is consistent across all the sets

To transpose the data into a pivot report, I have used the partition function and included the results in a CTE and select the data in the CTE using PIVOT operator
script –A1

Explanation: the key to the whole solution is to partition the sets in the data, the column RID has the partitioned values which actually works with the PIVOT. To make it more clear, look at the output of the CTE. You can see the data sets are partitioned with a column in RID. So when you execute the script A1, the RID makes the rows to unique.

When you execute the Script-A, you will see an incorrect results in the transposed data.
Script –A2

As I mentioned, the key is the partition column RID, let’s look at what is there in the RID by executing only the statement in CTE

So, the partitioned value RID for C_XYZ should be 3 as it belongs to 3rd set (look at the insert statement above) , but here its 2 , because I had partitioned the col0 order by IID.
So, if I can partition the data based on the sets, then it will resolve the problem, but there is no such function exists in SQL Server to partition based on defined sets. So I followed the below technique to partition the data based on the column value (NAME). 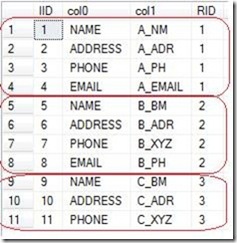 Now, you will get the desired output as the RID is able to show the correct data based on the sets by using the below script.

Email ThisBlogThis!Share to TwitterShare to FacebookShare to Pinterest
Labels: Development